Why do I train Wing Chun? 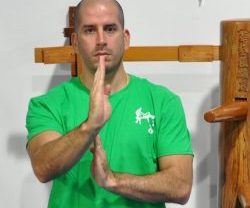 How to bait the opponent into your fighting game.

The basic understanding of a Wing Chun fighting guard is to put your hands in front of you in a position where you think you might be attacked. We do this in order to better protect ourselves.

This guard was originally intended to be used against Kung Fu styles. That is the reason why we sit square on our basic stance the Yee Jee Kim Yeung Ma, since most Kung Fu styles don’t hit and run like various western fighting styles.

We sit square in relation to our opponent helping us achieve good mobility in terms of footwork when reacting against the attack and by standing on this guard one has equal reach with both arms. This guard also helps the student understand the principle of weight distribution.

Now to better understand how I apply Wing Chun, we should take into consideration my SiFu’s background in this fighting system. I give full credit to my SiFu Duncan Leung who learnt his Wing Chun from our late Grandmaster Ip Man in the 1950’s under private instruction where he was taught how to apply Wing Chun techniques, theory and principles in combat. And together with his fighting experience in the US testing what he had learnt from Ip Man against multiple challenge matches fighting against exponents from Karate, Muay Thai, Taekwondo, Boxing, to name a few.

One characteristic in my SiFu’s interpretation of the Wing Chun system is that we should not block; instead we should cover. Blocking will leave you always one step behind your attacker, because in order to block you must see what is coming at you and then react specially to meet it. Covering on the other hand, allow you to always be one step ahead of your opponent.

Intentionally leaving a certain area exposed as bait enables you to sense where the attack is coming from ahead of time, so all you need to do is cover the area that is exposed.

In Wing Chun there are various fighting guards, apart from the basic one mentioned above. We also use other guards either to influence the opponent’s choice of attack or reaction, so that way we can be one step ahead of our adversary. Or we place our hand techniques according to our opponent’s strengths. For instance if you are dealing against a good puncher then your first choice would be to hold a Wu Sau (Guarding Hand) close to your face, then if you’re fighting someone with very fast kicks then you would like to position your lower arm closer to your mid-section.
If you’re dealing with an opponent with a vast fight experience specially a person who can judge distance and timing very well then you must stand with one foot in front together with the same arm leading. This will help you reduce the area you are exposed, the distance between your leading hand will be closer to your opponent and it’s a great position to generate power from a short distance.

However as our late Grandmaster Ip Man would say to my SiFu don’t believe every word I say until you’ve tested it and once you have and you’re satisfied with the end result then you’ll have a full understanding of what I’m trying to teach you.

Basically what I’m trying to say is that every student should always listen to his/her teacher with respect together with common sense with what is being taught. Then should test the techniques in training under a controlled, safe but realistic environment to see if they work. This way they will be able to recognise their strengths and weaknesses and start to build a solid foundation of techniques together with lots of confidence.

This is very important because we are discussing martial arts, and the core foundation of Wing Chun is learning how to fight and be able to defend oneself efficiently.

If a Wing Chun student isn’t well prepared or due to the unrealistic approach his had in training. This will put him or her in grave danger the moment they try and defend themselves under a real attack.

I always teach my students to imagine having to deal with an adversary much larger, stronger and faster than us. If you have a guy 195cm tall and over 100kg in front of you swinging with all his might, or chasing you down the street with a broken bottle, how would you stand, move or even run? If you think about its realistic applicability in such situations, you’ll know whether the Wing Chun guard along with the footwork you’re being taught is right for you.