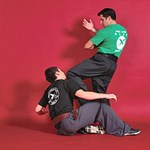 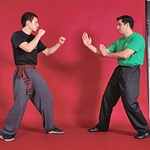 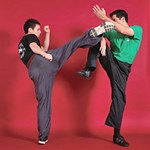 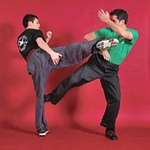 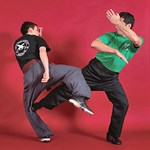 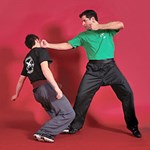 We encourage students to use real power when applying the techniques. There is a misconception that in Wing Chun you shouldn’t use power. I’ve heard many teachers say, ‘Wing Chun does not use power, and if you use power that is not Wing Chun’. What they really mean is that you shouldn’t use brute force against force, but you can of course use power to cover, redirect, pull, jam, etc. and, most importantly, to strike.

When practising Wing Chun, the student should always assume he/she is smaller, weaker and slower than their opponent, and take these disadvantages into account when trying to overcome the enemy.

Sifu Leung often says, “You have to use the right tool to do the right thing.” He means that if you are using a tan-sau (palm-up redirection) in chi-sau (sticky hands), it’s the perfect solution to stop the other person’s fook-sau (bridge-on-hand) from coming in, but having said that, you can’t expect to be able to apply that tan-sau against a right-hook coming with power, or against a powerful roundhouse-kick. In such situations you would be better off doing a kwan-sau (rotating arms), as shown in photo five of the image sequence at right.

In Applied Wing Chun, there are various fighting guards, apart from the most common and well-known Wing Chun guard (with both knife-hands in front covering the centerline, as shown in the first photo). We also use other guards in order to influence the opponent’s choice of attack or reaction, so that way we can be one step ahead of our adversary. For example, if I hold both hands low and expose my face, I can anticipate that this is where my opponent will aim his strikes and can plan my counter-attack to suit. The same will occur if I place my hands very high, exposing my stomach.

Footwork is very important to us, because it must support your whole structure; it has to be strong but flexible and enable you to move very quickly. Many masters argue about the correct footwork and some boast that their Wing Chun has the ‘secret footwork’. All I can say to every student is respect your teacher, but always use common sense in assessing what you’re being taught. If you have a guy 195cm tall and over 100kg in front of you swinging with all his might, or chasing you down the street with a broken bottle, how would you stand, move or even run? If you think about its realistic applicability in such situations, you’ll know whether the footwork you’re being taught is right for you.

Around the world today, there appear to be many teachers who don’t fully understand the true concepts and theory behind Wing Chun and some must add techniques from other martial arts to compensate for the resulting holes in their systems. It’s common to see people adding boxing techniques to their Wing Chun to be able to deal with boxers, or when they spar they just end up kickboxing, because they don’t know how to make Wing Chun work against different styles.