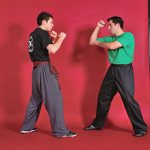 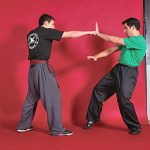 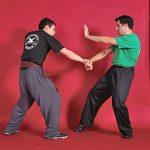 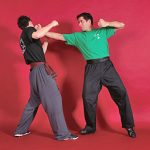 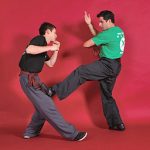 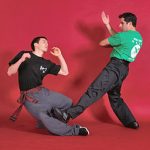 One of the most common mistakes – which can even be seen in the fight sequences performed by Donnie Yen in the movie Ip Man – is in performing chain-punching, also called chase or roll-punching. This basically involves non-stop, straight, vertical-fist punches to the opponent’s face. The error occurs when the opponent falls to the ground and the Wing Chun practitioner kneels over him or on his side and continues delivering these punches. This goes against the most basic principle in Wing Chun, which is that the shortest distance between two points is a straight line, hence we generally strike with the closest weapon to the target. Therefore, if I am standing in front of my opponent and I want to hit him, my best option would be to use my hand to strike his upper body or face. If I were to kick him, I would deliver a low kick to his legs or groin, because that would be the closest target to my chosen weapon. But if I bend down to punch my fallen opponent’s face while he’s on the ground, it defies this principle – it would be like both of us standing and me trying to punch his feet. So instead, if our foe falls on his back we’d kick him, rather than follow him down with punches.